Biking in Vikingland 2: Up and Down the Range

This has been a week-plus of ups and downs, topographic and otherwise.

We've been exploring the Mesabi Range, or "The Range" to the locals, who refer to themselves as "Rangers." The first challenge was to get there. We did a short day to the edge of civilization near the Duluth airport, then set out early on lonely US 53, a 4-lane divided highway that goes through no towns whatsoever before reaching the Mesabi. Going for us was a 13 mph wind out of the south, with our destination almost perfectly north. The shoulder turned out to be fairly smooth by northern Minnesota standards -- deep frost makes it almost impossible to keep a road smooth for long, and some are so beat up you need a tank to ride them -- but then the northbound lanes, and their nice wide shoulder, disappeared for 7 miles of construction! 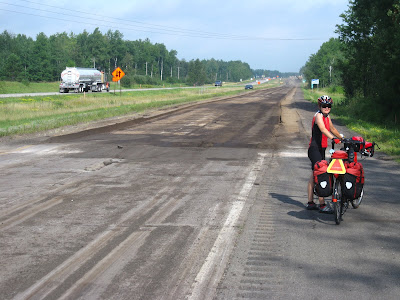 We found an unorthodox solution -- we rode the left shoulder against traffic until the northbound lanes reappeared. We never felt in danger in the construction zone, as there were no roads of any consequence meeting Hwy. 53 in that area, and the shoulder was so wide that we were not at all near the oncoming traffic. Having cars come at us on the right did give us flashbacks of riding in New Zealand, however. We made the 55 miles to Eveleth MN quite easily, thanks to that tailwind, the almost perfectly flat terrain, and the five water bottles that we filled to the brim for this deserted stretch.

The Mesabi is a range of low hills, few more than 500' above the surrounding valleys so far as we could see, but deep in iron-rich rocks. Mining began a little over a century ago, and continues still, though at a somewhat reduced pace. There are man-made piles of "overburden" all about, rock removed before the rich ore is reached, and many, many pits from played-out mines such as the Leonidas shown here. There was a good viewpoint from one of those overburden piles, which you can see in the foreground as we look at the pit to the north and the town of Eveleth to the east. 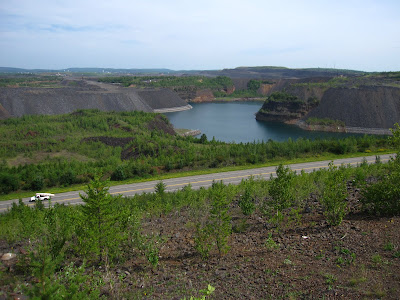 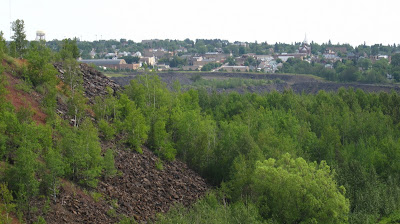 Some mines started as underground mines, but the ore was so near the surface that open-pit mining became the norm. Some of the pits have been rehabilitated, such as the wonderfully-named Lake Ore-Be-Gone near Gilbert, with the local boys enjoying safe cliff-diving thanks to the steep surfaces left by the miners. 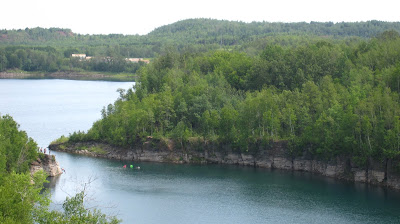 A short ways away was the Rocheleau group, a pit today that is 2.7 miles long looking north as the result of 14 different mining operations expanding one into the other to create this huge pit. 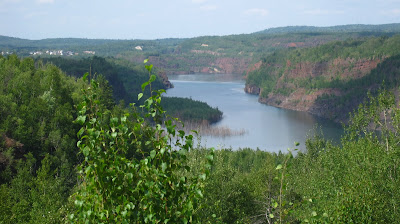 It got so large that it came to the edge of the city of Virginia MN, where Louise is getting a second and third view of it from the west side. 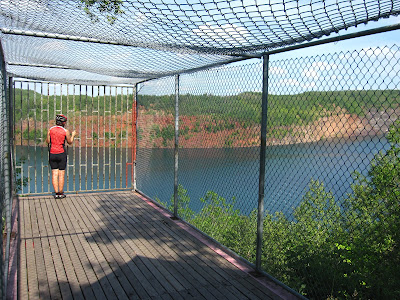 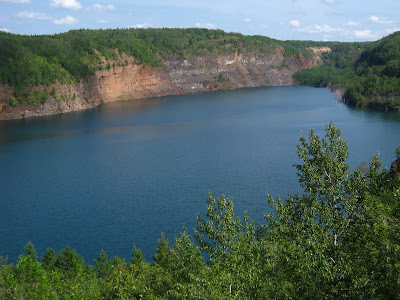 Although the Mesabi is not a great mountain range, the land is plenty rugged and the Mesabi Trail was one of the hilliest bike trails we've ever ridden. 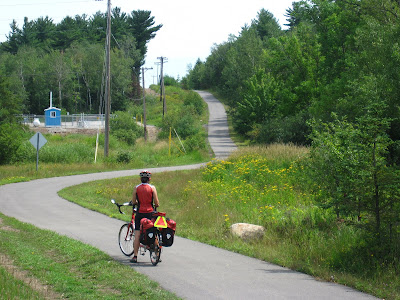 We took it 80 miles from Eveleth to Grand Rapids MN, and almost half of those miles appeared to be on old railroad lines or mine haulage roads, neither of those stretches altogether flat but at least not steep. Other sections ran up and down hills and around sharp bends, and kept us alert and entertained with their meanderings. It certainly drummed the region's hilliness into us!

Another up and down occurred in Virginia MN. We took the panniers off and left them at our hotel to do a little spin about the city. Jeff thought that the bike felt a little wobbly for an unloaded bike (with panniers on it's always a little bit wobbly!), so he checked the rear wheel and sure enough it was out of true, i.e. wobbly. He got out his spoke wrench to fix the problem and then said a few of those words Dick Nixon said on the Watergate tapes that got censored out. He saw why the wheel was out of true -- the rim was literally ripping apart! (To really see what we're talking about, click on the photo to enlarge it, and look at the grommet hole on the left, with two rips in the rim surface above and below the grommet and two smaller rips headed out to meet them) 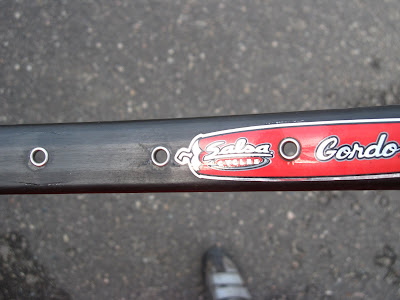 We found a bike store in the yellow pages and rode over. After a lot of searching around his storeroom, Nick the mechanic finally found a slightly used rim that was the correct size and number of spokes (they come in 28, 32, 36, 40 and 48-spoke models, though ours was the commonest at 36). Nick was even willing to get right on the job of rebuilding the wheel, and we actually had a phone call less than two hours later telling us that the wheel was done! We walked over in the morning and our tandem was once again safe to ride. Close call! Many thanks to Nick!!!

BTW, our stay in Virginia coincided with a classic car weekend, and we got quite a display of them both parked and cruising up and down Main Street. The next morning as we left town, Main Street was closed to all traffic and classic cars were parking almost fender-to-fender in the middle of the street, two columns of them stradling the center line and stretching 6 or 7 blocks. 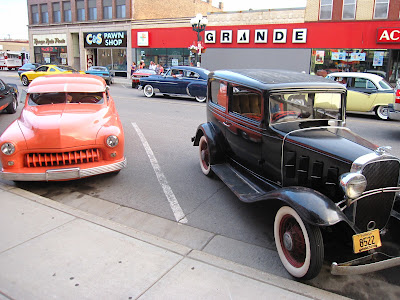 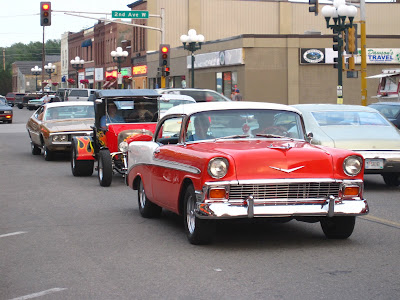 Back on the trail, we enjoyed the deep woods of pine and birch, 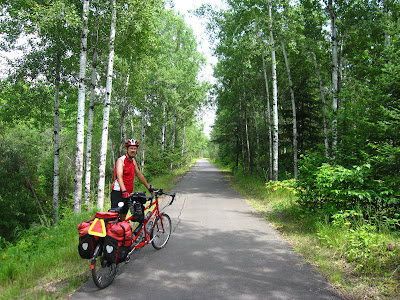 and appreciated how much they protected us from winds that would have been stiff headwinds out on the plains. Just outside Hibbing we came to the largest mine pit of all, known today as the Hull-Rust-Mahoning but actually a consolidation of 30 different pits. 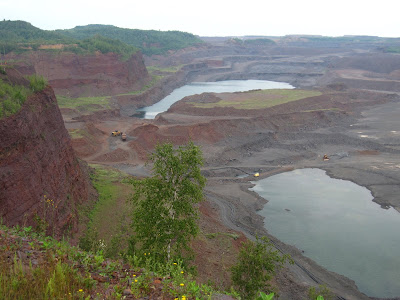 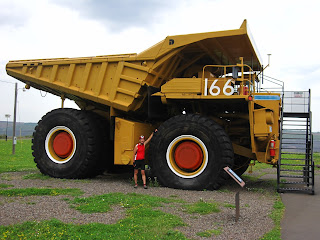 It gets as deep as 600' in one area, and is so massive they've dubbed it "The Grand Canyon of the North." Nearby was some of the equipment, which Jeff modeled for size. The operator of that monster truck described it as like driving a two-story house from the attic.

The mine was particularly successful while it was mining hematite that was as much as 60% pure iron. 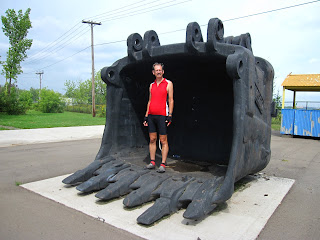 During WW II this single large pit provided 25% of all the iron used in the U.S., at a time when aircraft carriers, Liberty ships, tanks, and many other things created an unusually heavy demand for this metal! The hematite ran out in the 1980s, and what's now mined is 30-35% iron. It is concentrated into little pellets called "taconite." Mined, that is, when there's not a recession going on. This mine laid off about 800 employees last year, and it's not clear how soon they'll be called back. Another large operation further north has started calling back some of its laid-off employees, so there's some hope yet for Hibbing.

As the mine started spreading out a century ago to get all the ore, it turned out that the town of Hibbing lay over some of the good stuff. The mine company moved the whole town two miles south. In this second photo of the pit, the first quarter mile of air is where the town used to be! 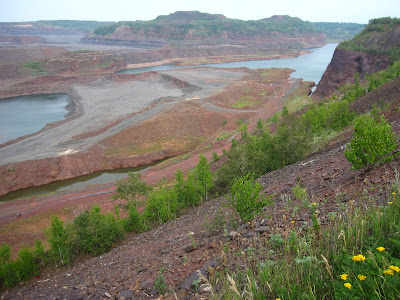 The building that is today the Mitchell-Tappan House B&B took the amble southward, and was far from the largest building moved. We stayed there, and it was a terrific B&B. Owner Pam made us right at home. 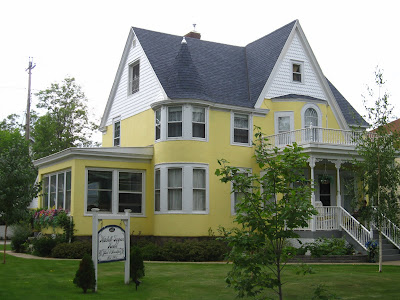 We ended up staying an extra night in Hibbing, partly because of the great B&B, and partly because the next day was fairly stormy. Two women riding the Mesabi Trail in the opposite direction did leave, and we're pretty sure they got drenched about a half-hour later, though most of the day was just threatening. Thing about getting drenched, though, it kind of lasts the rest of the day when you only have one outfit for biking. Call us "rain wimps," but we do try very hard to not get soaked.

With time on our hands, we enjoyed reading on the sun porch and then walked to the Greyhound Bus Museum. 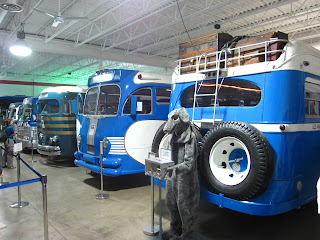 Yes, Greyhound as in the monolithic bus company that almost all of you our readers have taken some time in your life. It started here in Hibbing with a car dealership that wasn't selling cars, but had a lot of people wanting to take "test drives" that weren't turning into sales. The owners decided to take one of the cars and offers rides to and from the mines, about 2 miles, for 15 cents. It was so successful they put more cars into it, then started stretching the cars much like today's stretch limos, then buying buses that got larger and larger and ... well, the Greyhound Company resulted. 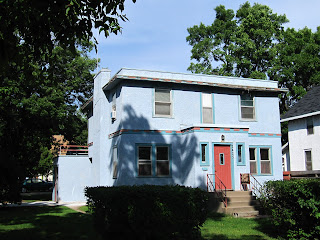 We also swung by a nondescript house a family moved into in 1948 when their boy, Bobby Zimmerman, was 7 years old. He lived there until he left for college. Soon after that he changed his name to the one you probably recognize: Bob Dylan. 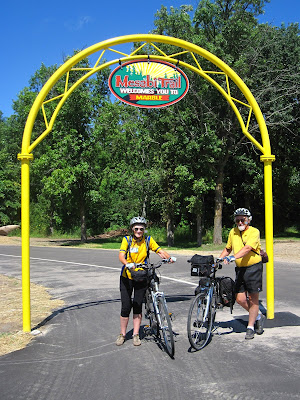 Back on the trail, we met another couple that inspired us, Bob and Gerry who are 14 years older than the each of us and still cycling. Like us, they came to Minnesota from far off -- in their case Florida -- to ride these wondeful bike trails. After passing one last but very impressive pile of overburden, we finished the Mesabi Trail in Grand Rapids MN, 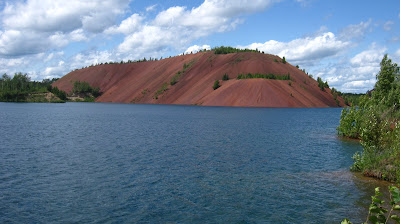 so-named because of the rapids that prevented further steamboat travel up the Mississippi River. We had another comfortable stay at the Morning Glory B&B before heading west on US 2 to cross the fabled Mississippi itself. This far north, however, it's more of a stream! 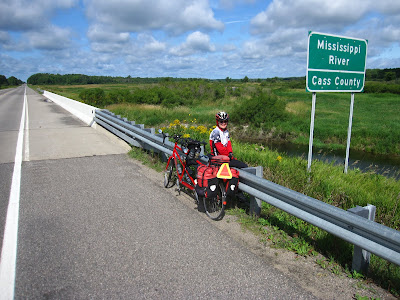 Now that we're west of the Mississippi, it seems like a good time to sum up and leave the lakes and plains of western Minnesota for the next blog entry. Talk to you next from somewhere down the road in west-central Minnesota!
Posted by Jeff & Louise Davis at 2:56 PM