Biking in Vikingland 1: Starting out

Thank goodness book titles are not copyrightable. Jeff found a book on biking Minnesota and Wisconsin some years ago, and the catchy title so impressed him that he's bestowed that moniker on our latest tandem adventure, Biking in Vikingland.

These two states are loaded with bike trails, mostly converted from abandoned rail lines but some with other origins. Planning started with a notice in Doubletalk, the newsletter of the Tandem Club of America, that the Midwest Tandem Rally (MTR2009) would be held Labor Day weekend in Rochester Minnesota. Hey, we have nothing planned for Labor Day, or in fact for a few weeks before or after -- (ain't retirement great?) -- and we had extremely fond memories of biking through this area in 2003. A little web research came up with a map showing just how many bike trails there are in Minnesota, and in short order we had sketched out the trip you see here. Bike trails are in red, wide red lines are ones we're going to ride on, and wide green lines represent road miles between bike trails. Since the vast majority of those road miles are on back roads -- county roads or low-traffic-density state highways -- relaxed riding is hopefully going to be the order of the day. Just start in St. Paul, head north, head west, head south, and eventually reach Rochester in the SE corner of the state!

OK, what about after the Tandem Rally? The grandaddy of American Rail Trails is the Elroy-Sparta Trail in Wisconsin, which Jeff cycled in 1971, Louise in 1994, and both of us enjoyed together on the tandem in that 2003 trip. So while planning the new trip, it was natural to ask, how about another ride on this great trail, through 3 tunnels and across the unglaciated beauty of the so-called "driftless area" of Wisconsin?

Finally, we mentioned our plans to Don and Erica, tandem friends from Victoria BC. They were the chief organizers of the Northwest Tandem Rally held this year in their town (it rotates around the Pacific NW each year). Their "reward" for all their hard work was not being able to ride at their own rally -- just too much to do! The MTR2009 sounded like a great idea, since they obviously do enjoy tandem rallies, and their interest was piqued even more when they heard about all the rail trails and back roads. Erica still works, however, so they could not join us for the entire adventure. Instead, they'll catch up with us at the Rally and team up for the last 2 ½ weeks, riding out the SE corner of Minnesota and into Wisconsin. We won't be taking in so large a percentage of Wisconsin's many bike trails, but we will be on bike trails for over 50% of our miles in that state. In the Wisconsin map below, bike trails are in green and road miles are in black, going from La Crosse on the Mississippi to Milwaukee on Lake Michigan, coming in on Hank Aaron Trail.

And so on August 2nd we set out on our favorite long-distance carrier, Amtrak, specifically on the Empire Builder that runs from Seattle to Chicago via the Twin Cities, where we disembarked. Don & Erica will hop off two stops further down the line when they head to the rally, and Milwaukee is where we'll all reboard for the train ride home. Amtrak is quite bike-friendly, and we're so used to the routine that it all went quite smoothly and it seemed like no time before we were sliding the tandem out of the cardboard box that Amtrak provides, ready to ride. We've taken the Empire Builder so many times -- for Jeff, over a dozen -- that it seems almost like a commute, albeit a pretty scenic one with the Cascades and Rockies, the Columbia and the Mississippi, and the vast expanses of Montana and North Dakota plains.

We had previously seen quite a bit of Minneapolis, the bigger twin of the Twin Cities, so this time we focused on St. Paul, and liked what we saw. Besides visiting friends Stuart and Carole from the cruise, we tootled 80 miles around town on our tandem, and 50 of those were on bike trails! Try doing that in other cities this size! Highlights were a trail along the Mississippi, complete with grain barges and a steamboat; Fort Snelling at the confluence of the Minnesota and Mississippi Rivers, a place that has guarded this spot for over 150 years; and a tour of the home of James J. Hill, known as the Empire Builder for his success in bringing the Great Northern Railroad, and civilization, across the northern plains all the way to Seattle. It was a big house for a short fellow with a big family -- 10 kids, each of whom got his or her own bedroom -- and even bigger ambitions. We would dearly love to show you some of this as well as tell you about it -- we know you only read this for the pictures, to turn a phrase -- but an SD card in our camera that served us well in NZ has not liked the transition to the northern hemisphere, and gone bad. It deleted a few shots without being asked to, then shut down entirely.

So the visual part of our bike trip will have to start with a canoe trip! After the grand tour of St. Paul, we rode 25 miles east to Stillwater, a quaint town on the St. Croix River that forms the boundary between MN and WI for about 150 miles. Next day we waited out a morning rain for a 30-mile ride up to Taylor's Falls, not a great distance but challenging due to the road's frequent undulations up and down the steep sides of the St. Croix valley. At Taylor's Falls we took a day off the bike for a seven-mile one-way canoe trip, with a few hundred folks with similar ideas, and others with even less strenuous ways of seeing the river. It's the same price whether they pick you up there or at the next take-out at 17 miles, but with a modest current and a fairly strong headwind, we were more than happy to hang up the paddles at 7 miles and enjoy the bus ride back. 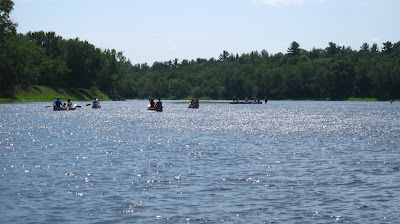 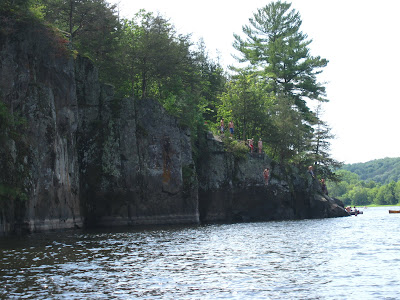 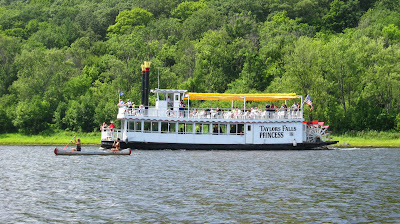 Minnesota began to be settled in earnest in the 1850s, and Taylor's Falls has the oldest schoolhouse in the state, dated 1852. 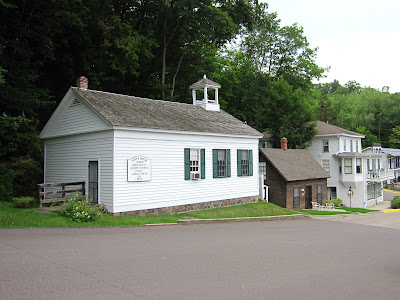 A day and a half's riding from there brought us to Hinkley, a town that became infamous in 1894 for a massive fire that in 4 hours on September 1 destroyed 480 square miles and killed about 450 people. The Hinkley Fire Museum in the rebuilt train depot had a film, photos and artifacts, and this wonderful diorama of the way the town looked just before the fire. 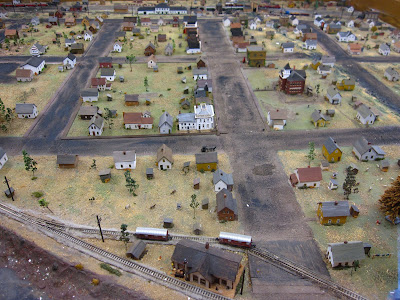 Everything you see here burned to nothing, as this was a firestorm, a fire so large it created its own cyclonic winds, estimated to have exceeded 75 mph. It's said that the US and British Air Forces studied this and a handful of other naturally-occurring firestorms, generally caused by drought and aggravated by foolish lumbering practices that hit various parts of the midwest a century ago, when they set about intentionally creating ones in Germany and Japan during WW II, such as those in Dresden and Tokyo.

We left Hinkley on the same rail line that brought another 400 people to safety by such a narrow margin that a trestle they crossed was already burning as they started across, and collapsed just after they made the far side. Telegrapher Tom Dunn, depicted in this diorama back at the Fire Museum, stayed on to keep information flowing to the outside world, and his last message was "I think I've stayed too long." He had. 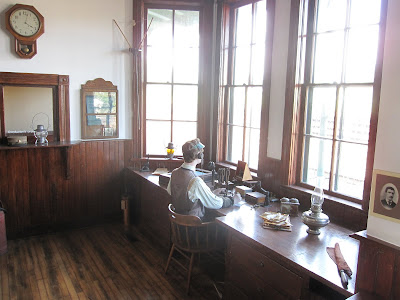 Today the rail line is the Munger State Trail, and what a wonderful ride this was! It carried us 70 miles, all the way to Duluth, every one of those miles paved and remarkably smooth. There was a fairly stiff side wind, but forests in places and a line of trees and bushes next to the trail in more open areas kept the side wind to a minimum. 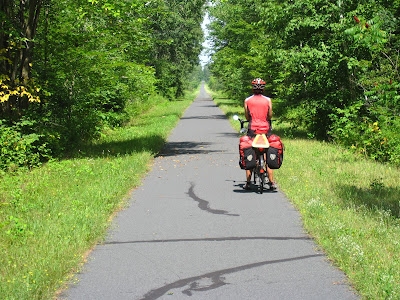 Except for a few small towns, some like this one with the old train station intact, we mostly enjoyed seeing regenerating pine forests and farms growing corn and soy. 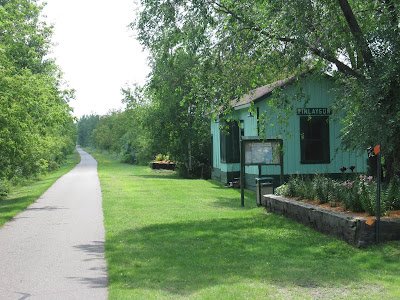 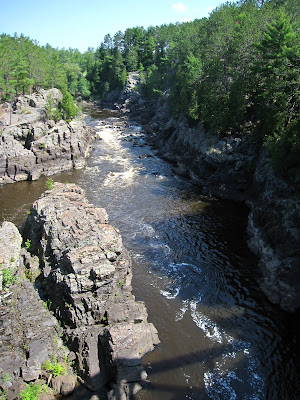 The first 60 miles were quite flat, tenths of a percent grade at most. Soon after crossing the chasm of the St. Louis River and cutting a path through some rugged basalt outcroppings, however, 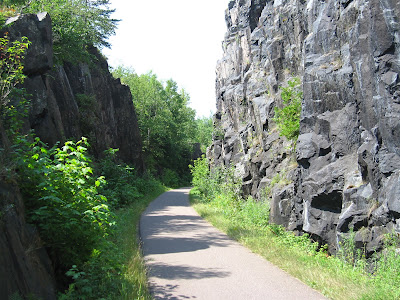 we started a rewarding descent to Duluth at a steady 1 percent, not quite enough to coast but steep enough to allow us to move along at over 20 mph with minimal pedaling effort. Well before this we had commented to each other how good it felt to be back on the bike and touring on our own power. The beauty and serenity of the Munger Trail quadrupled that feeling. 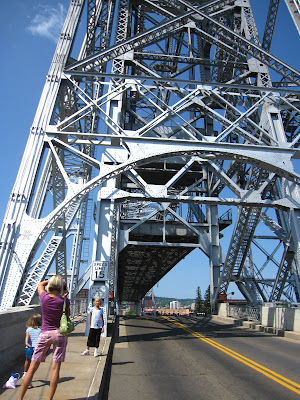 As the Space Needle is to Seattle and the Arch to St. Louis, the Lift Bridge is to Duluth. This massive structure bridges the Canal, a piece of water with quite a history. A sand spit stretches 7 miles out from Duluth, almost touching another spit that comes out from the Wisconsin shore. The beach you see pictured is about 5 miles out from town on Minnesota Spit, at Duluth's favorite swimming place today. 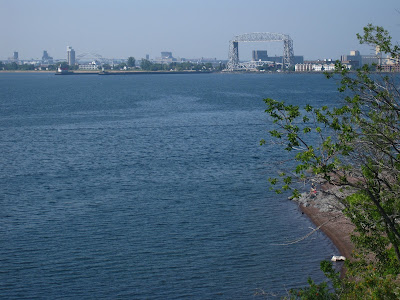 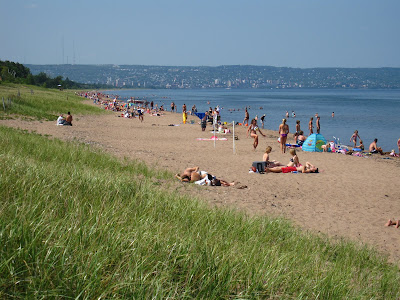 Boats first tried docking outside Minnesota Spit, but fierce storms -- one of them sunk four boats -- convinced folks that the harbor really needed to be behind the spit. But ships going that far from Duluth to get around the spit would be tempted to stop instead in the twin city of Superior Wisconsin. Duluth folks started to dig a channel at the base of Minnesota Spit. Wisconsin folks headed to federal court and obtained an injunction to stop them, but they got it on a Friday afternoon and the marshall said he couldn't serve it until Monday. It was a really busy weekend in Duluth, as you can imagine, and the Canal was a fait accompli of course by Monday morning. 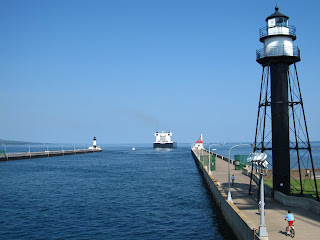 Duluth is a working town, with a modest and uninspiring downtown but a busy, busy harbor. Ship after ship after ship sails in or out through that canal, loaded usually with wheat from the vast plains of North Dakota and Montana, coal from the Powder River basin of Wyoming, or taconite, a type of partially refined iron ore, from the Mesabi Range about 70 miles to the north of Duluth. We enjoyed a half-day walking the wonderful Lakefront Trail and watching a tai chi class in action, 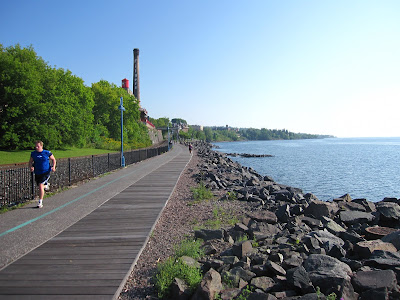 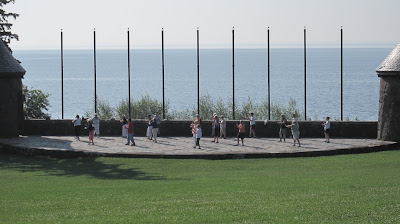 then turned the bike northwards to see the Mesabi ourselves. We have a half-day ride to the edge of civilization up near the airport, then our longest day of the trip, about 67 miles we think, to the first town with lodging, Eveleth. From there we'll ride the hilly Mesabi Bike Trail 80 miles through the greatest iron deposits in North America. Tell you more about it in our next blog.
Posted by Jeff & Louise Davis at 1:24 PM