The overwhelming majority of Americans headed to Europe do so by heading to their nearest airport.  A few get there by ship from East Coast cities.  We suspect that there are very, very few who use Amtrak for any part of the way there, let alone almost half the 9,000 miles, but it's do-able! 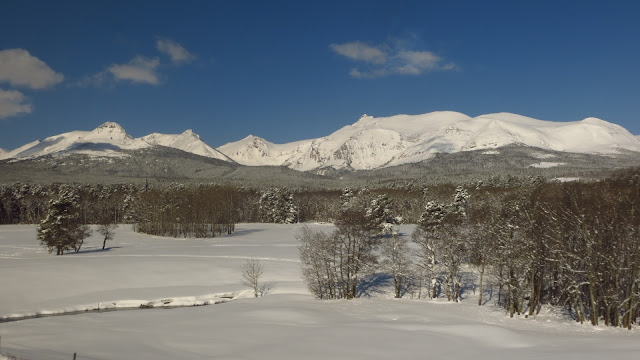 Thanks to all the motels and restaurant meals that went on our Amtrak Guest Rewards credit card last summer, we had enough points for a free sleeper all the way from Seattle to Fort Lauderdale, Florida.  Even though it was exactly one month into Spring, it was anything but "Springtime in the Rockies" as we passed along the southern edge of Glacier National Park.  Even Minneapolis was covered in a fresh blanket of snow on April 22!  The train stops for a 15-20 minute refueling every 350 miles or so, when we like to get off and stretch our legs walking up and down the platform.  Since we're off to see Europe in the Summer, we have darned little cold-weather clothing, and every piece of it was on us at these stops until we got close to Washington DC. 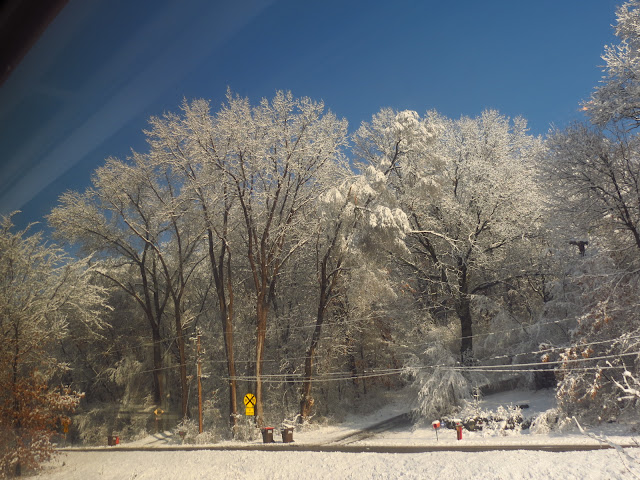 We broke up the 4 days of train travel with a 24-hour stay in Toledo Ohio, in part to use a shower that didn't do the Macarena, in bigger part to revisit the Toledo Art Museum.  While you wouldn't mistake it for the Metropolitan in NYC, the MFA in Boston, the Art Institute in Chicago or the National Gallery in DC, it is among the very best in the next tier down.  Here are just three examples to entice you to include Toledo on a future trip of your own, starting with Thomas Cole's breathtaking 1840 fantasy, "The Architect's Dream."  It is reminiscent of his 5-painting series "The Course of Empire," one set of which is in the National Gallery of Art and the other at the NY Historical Society, their most precious paintings. 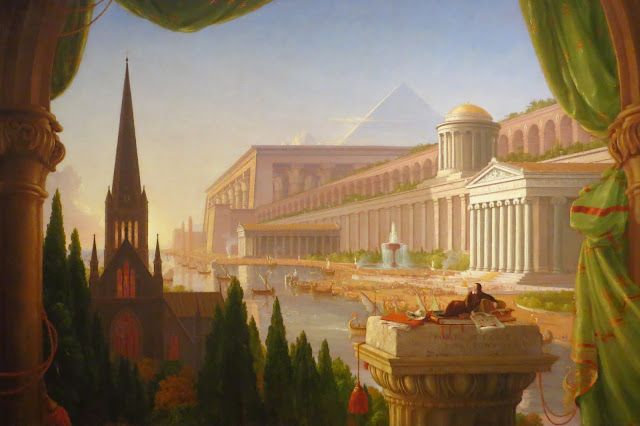 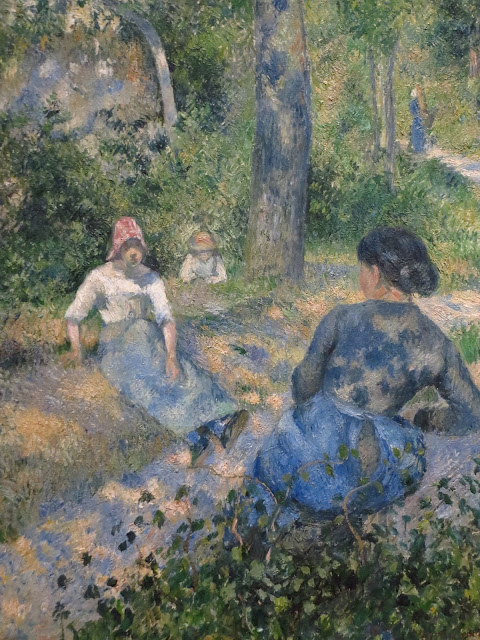 Along with a good sampling of major American painters of the 19th century, the Toledo Art Museum also has works, often quite excellent ones, by most of the most famous European ones.  Camille Pissarro was 10 years older than Monet, in fact the oldest of the group, but with as young a vision as any of them as the first example from 1881 illustrates, "Peasants Resting."  You can see his influence on Post-Impressionist Georges Seurat in his dabs of color, which Seurat reduced to dots of color in his "pointillist" works.  As the only artist to exhibit in all eight Impressionist exhibitions in Paris as well as being the student of Corot, a colleague of Monet and Renoir and mentor to Cezanne and Gaugin, among others, Pissarro is a central figure in the development of modern art. 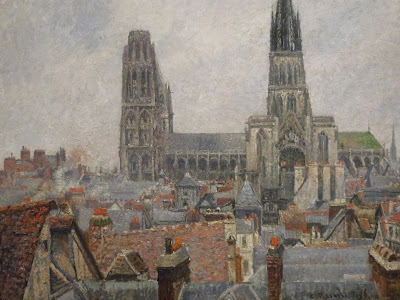 But, just as Beethoven grew deaf, Pissarro battled eye infections that left him blind at his death in 1903.  A pioneer in plein air (outdoors, rather than in a studio) painting, he had to wear dark glasses and limit himself to painting from windows in his last decade.  In 1896, when he was exactly the same age as we are right now, he executed this moody "Roofs of Old Rouen, Grey Weather."


Besides the stopover in Toledo, we changed trains twice.  Chicago was only an hour and a half wait in the comfortable lounge Amtrak provides for sleeper passengers.  In Washington DC, however, we had 7 hours between trains, so we parked our suitcases in the special lounge there and hopped on the Red Line subway to meet up 8 stops away with dear friends Louise and Masaharu, who then shuttled us in their car to nearby Hillwood House. 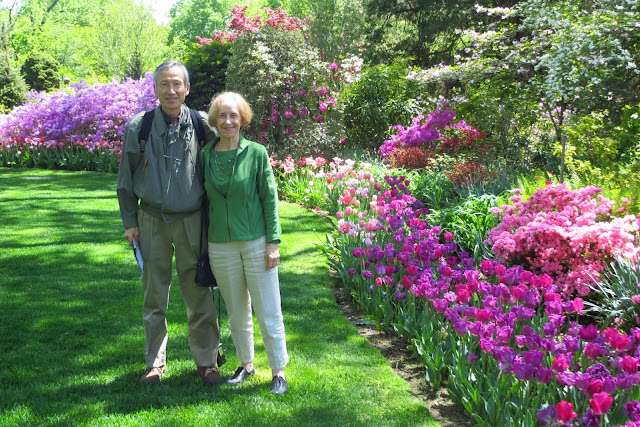 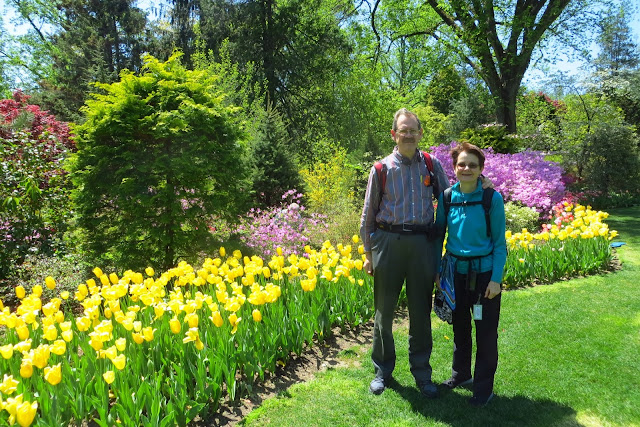 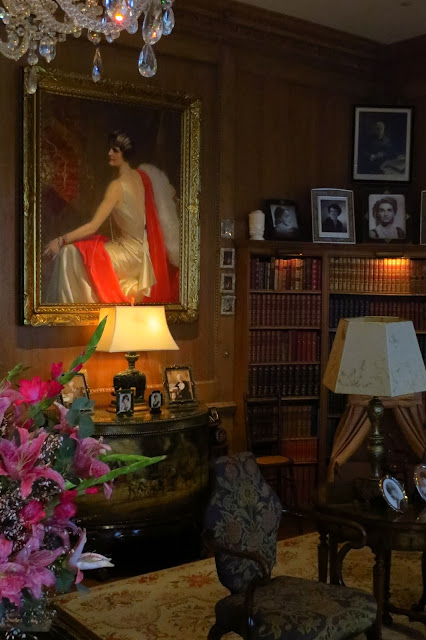 Hillwood was the final home of Marjorie Merriweather Post, the lone child of cereal baron C. W. Post and, by her 20s, the wealthiest woman in America.  Also one of the more frequently married and divorced (4 times for both ceremonies).  And not just to anyone -- hubby #2 was E. F. Hutton, who helped Ms. Post gobble up Birdseye Foods and to convert the Postum Cereal Company into General Foods.  Spouse #3 was Joseph E. Davies, who became Ambassador to the Soviet Union in the critical years 1936-38, later described in his book "Mission to Moscow" and a Warner Bros. movie based on it.  While stationed in Moscow, Marjorie and her husband bought up tons of art from the government, which didn't want the decadent anti-socialist stuff, and desperate individuals, who did want it but needed rubles more.  Hillwood today has one of the largest collections of imperial Russian art in the world. 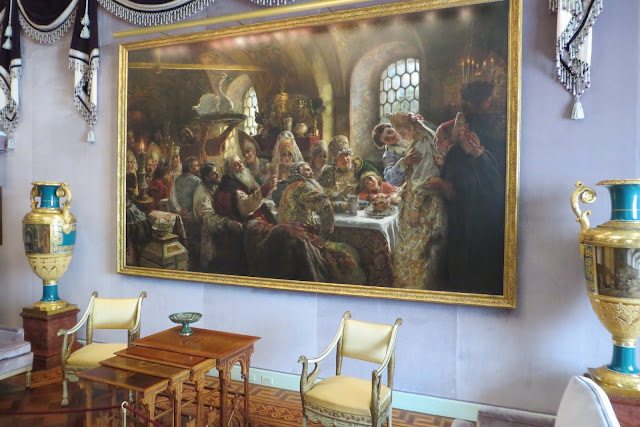 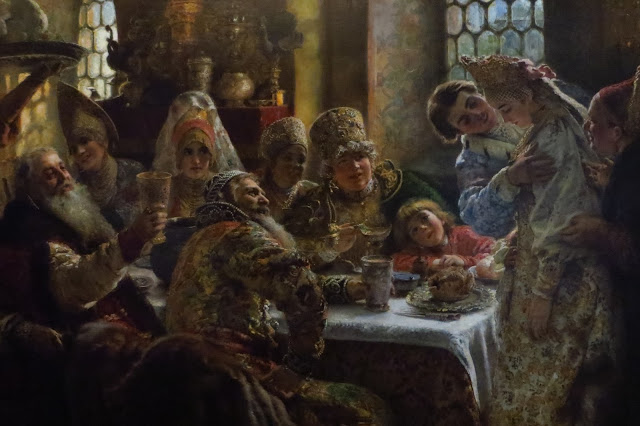 The hours went quickly, touring the colorful gardens, exploring the grandiose house, but also taking time to catch up on family news with Louise and Masaharu.  As it turns out, their son Thomas lives in Amsterdam, and we will be seeing him again and meeting his wife and daughter for the first time in less than 3 weeks, when we reach Amsterdam ourselves. 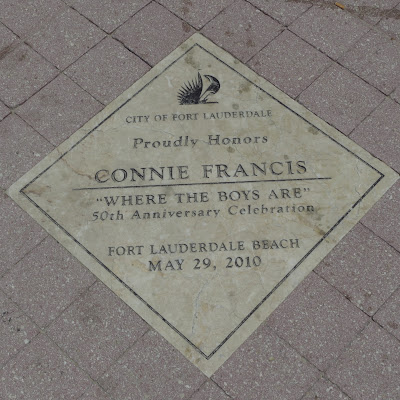 We're now in Ft. Lauderdale and less than 24 hours from departure on the Celebrity Infinity for the 12-day voyage to Europe.  A walk next to the beach brought to mind what Ft. Lauderdale meant to many Americans when the two of us were teens, but what we hadn't yet realized then was how racially limited that image of fun on the beach was.  A sign 100 yards away now makes the picture more complete. 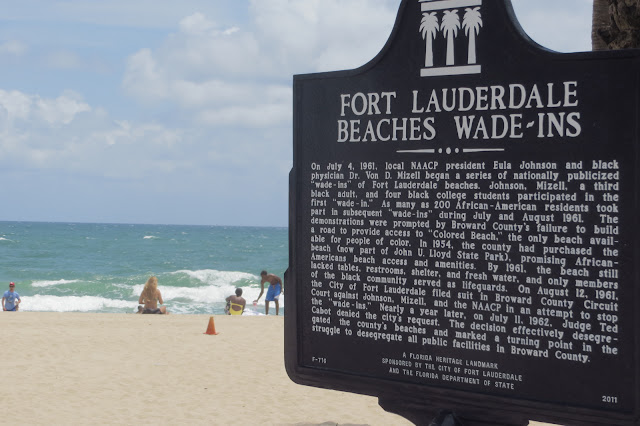 As we prepare to board our own large boat, we'll close with this shot of Ft. Lauderdale excess, where neighbors compete not only with who has the biggest house, but also the biggest boat.  Where else would you find boats bigger than the houses they're moored next to? 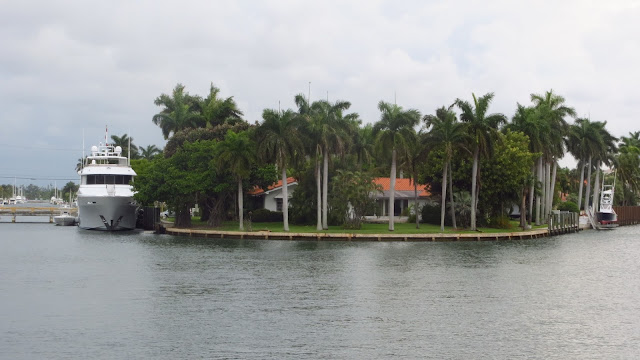 Heading Off to Europe

Time for a new adventure!  For the first time, we're turning our bike towards Europe for an 8-week trip on the Danube, Main and Rhine Rivers.  Friends from Spokane did the same thing in reverse, but on a 15-day canal boat trip following the map below.  We'll cover pretty much the same territory, but with the added flexibility of our tandem, not to mention the time to explore far more thoroughly. 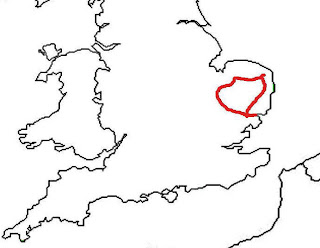 We had the travel all booked when, to our surprise, the word "Schengen" struck terror through our plans.  Most of the EU belongs to the "Schengen Zone," where travel is unrestricted for Americans once they get in, except for a tiny little detail that had previously escaped us -- the time limit.  Once you touch down in the Schengen Zone, you may as an American only spend 90 out of the next 180 days there.  Leaving stops the clock, but does not reset it.  We looked at our plans, and counted 108 days.  Oops!  So back to the drawing board, and we came up with a 19-day visit to the UK, which is NOT in the Schengen Zone.  We'll take a ferry there and back from the Hook of Holland, and do a loop around the area known as East Anglia, prior to our departure from Amsterdam. 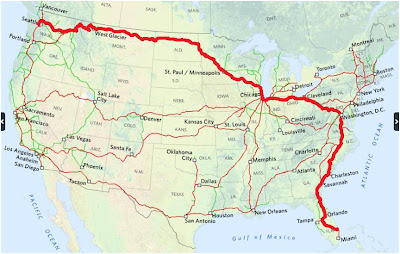 Even though we're biking in Europe, we figured out a way to start our trip on Amtrak.  In fact, we're taking Amtrak pretty darned near as far as you can go without looping back.  We start of course in Seattle on April 21, and hop off one stop from the end in Ft. Lauderdale, for a few days in the sun.  THEN, on May 1, we board the Celebrity Infinity for our trip across the Atlantic, in style.  12 days later we hop off in Harwich, England, with no jet lag.

However, where we really need to be to properly start our adventure is Amsterdam, so as soon as we hop off the Infinity, we move a short ways by cab past the docks of Harwich to the Stena Lines terminal, from which the ferry Brittanica will take us on a 6½ hour crossing of the North Sea.  On the Dutch side our boat will be met by a train that will take us right into Amsterdam!  One more taxi ride and we'll be in an apartment in a centuries-old building near one of the city's many canals for a three-night stay.

Up to this point, the tandem will be hiding, in many wrapped pieces, inside two gray suitcases.  The biggest unanswered question of the whole summer trip is -- what happens next?  We're hoping that the Dutch and German trains we take 3 days later to Vienna via Berlin will let us take the tandem assembled.  After much searching of the web, the answer so far is that we have to ask the question when we're in Amsterdam.  If yes, we leave the cases behind with the son and daughter-in-law of dear friends, who live and work in Amsterdam.  If not, we take the cases to Vienna, assemble the bike there, and FedEx the empty cases to Amsterdam (yes, FedEx is in Europe too!).  One way or another, we will hop off the train in Vienna on Saturday May 18, with our tandem.

Although we'll take time for sightseeing in Amsterdam besides (we hope) assembling the bike, and for about 24 hours in Berlin where we spend 2 nights and change trains, the real visit to Europe starts in Vienna with friends Jazz and Cordelia.  We met them on a bike trip two years ago, while waiting for a ferry.  Within minutes we were invited to stay with them in Oshkosh, where they both teach at the University of Wisconsin Oshkosh.  Jazz is currently on a 4-month fellowship from the Fulbright Foundation to teach and do research in Vienna, and we are one of several families they will be welcoming into their temporary home there.  Here's their New Year's card to give you a preview of our Vienna hosts:

The plan thus far is to spend 6 nights with Jazz and Cordelia in Vienna, then bike 375 km to Budapest over one week, do a little sightseeing there, then return by train or hydrofoil boat to Vienna for one more night before setting out on a 7-week trip west and north to the North Sea.  After our short hop over to East Anglia, we'll bike back to Amsterdam for one more 3-night stay, then board the Holland America Eurodam for a cruise around the Baltic followed by a crossing of the North Atlantic that will take us to places we never thought we'd get to see, including Iceland, Greenland, and Newfoundland.  Once we hit NYC we hop across the country with stops to see three of our four kids (the Tokyo-based one just didn't seem to fit into the line of travel) before returning back to Seattle on September 24.

We have a busy five months ahead of us.  We hope you find the chance to follow us across the globe, and in depth across Europe.  We hope to find ways to keep the blog reasonably up-to-date, but need to find computers along the way to do so.  We will also have to stop having so much fun sightseeing, to find the time.  So bear with us if we're not always posting the blogs on time.

Here's hoping all our readers find some Happy Trails themselves this summer!
Posted by Jeff & Louise Davis at 8:55 PM No comments: