Our regular readers know we've mentioned Amtrak more than a few times, as it is one of our favorite ways to get around the U.S. We took Amtrak to St. Paul to start our Minnesota-Wisconsin adventure, and now it was time to take it back to Seattle from Milwaukee. We had a 3:55 pm departure, which left plenty of time for us and our friends Don & Erica to take a 25-mile tandem tour of Milwaukee bike trails before arriving at the station to pack up. We've had remarkably good weather on this trip, and it held out to the very end. Ten minutes after we were inside the train station the skies opened and it poured cats and dogs. Talk about timing . . . 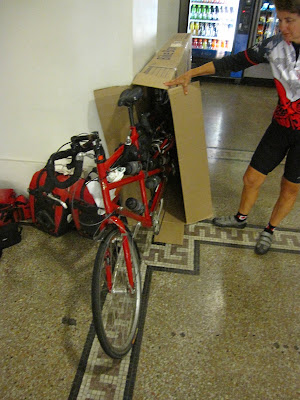 Amtrak provides cyclists with boxes for $15 each, with tandems needing two that we telescope together to make a single long box. Once in a while a baggage room will have used boxes that we get for free. They also lend out a tape gun, but we're responsible for having the tools to adjust the bike. We remove the pedals, pull off the stoker handlebars and hang them over the rear top tube, and turn the captain's handlebars, as you can see in the photo. We've done it enough that we can do the whole thing in about 30 minutes without feeling rushed.

The Empire Builder, as the train from Chicago to Seattle is called, takes 44 1/2 hours to cover the 2,120 miles from Milwuakee to Seattle. En route we enjoyed dinner the evening we boarded, all three meals the next day, and breakfast before arrival at 10:25 am. 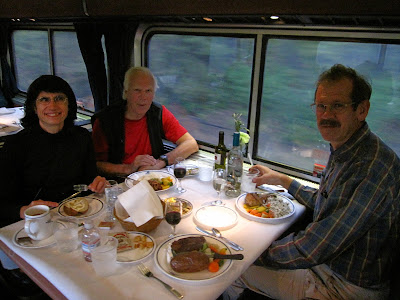 Meals are included in the fare when you have a sleeper. We had enough points on our Amtrak Guest Rewards credit cards to have a free trip both ways, while our friends paid about $1,300 for the round trip for the two of them. Meals are served at tables for four. Lunch and our dinners were of course with our friends, but we had breakfast at different times, so got seated with other travellers, which is always an interesting experience. There are always a chicken dish, a fish, a steak, a vegetarian offering, and a "chef's choice." Other than having a much more limited menu, the type of food is much like a Denny's. 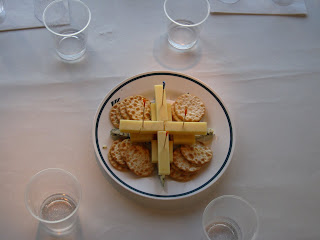 On some of the longer routes, including the Empire Builder, Amtrak offers a wine tasting in the afternoon for the sleeping car passengers. You wouldn't mistake this for a four-star wine bar, but the cheese was tasty and the wine from the budget aisles that we usually browse when buying for ourselves, so it was a fun experience. We were served two whites and two reds, and they awarded the remainder of the four bottles via a contest. Jeff won one of the bottles by knowing that the train was named after James J. Hill, the founder of the Great Northern whose nickname was indeed "The Empire Builder."

What we love about train travel is the chance -- indeed, the necessity at meal times -- to get up and move about the train. In addition, every 4-5 hours the train stops for 15-20 minutes for fuel and replenishment of the water tanks and sometimes of the food supplies in the diner and cafe cars as well. The nicotine-addicted use these to get their fix (there's no smoking on the train itself), and the exercise-addicted like us weave around the smokers up and down the platform, stretching our legs. 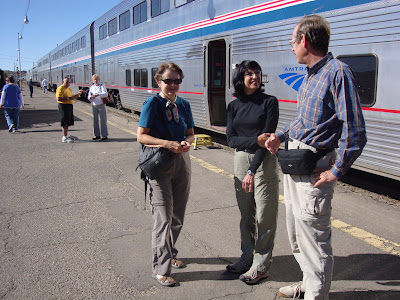 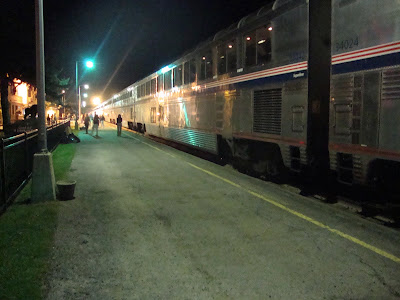 We've gotten to know some of these stops well, such as the old steam locomotive at Havre Montana, or the goat, symbol of the Great Northern RR that built this line, in Whitefish Montana. 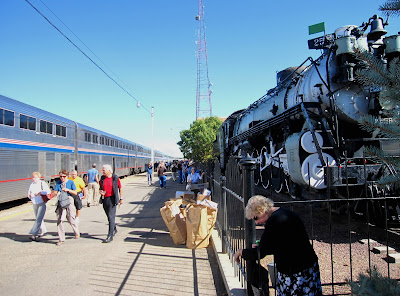 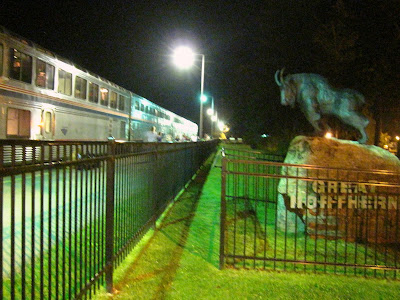 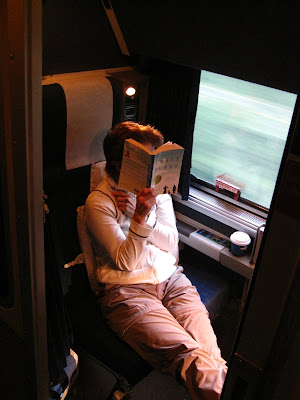 In the daytime we can read in our rooms or in the lounge car, which has wrap-around windows. At night the seats convert into a lower bunk and an upper bunk bed folds down from the ceiling. 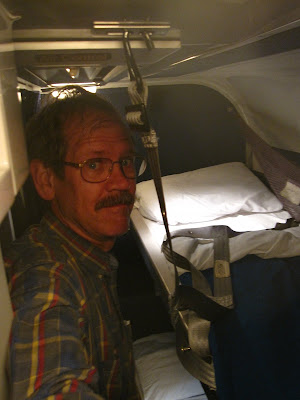 It's tight, but even 6'4" Jeff fits. And there's even a shower downstairs, if you don't mind doing something like a '60s dance step to wiggle with the train movement while you wash.

And of course there's the scenery. While much of it in eastern Montana and in North Dakota tends to blur into a semiarid pastiche of rolling wheatland and distant hills, the trip through Glacier National Park and the Cascades is always delightful. It helps that we have special memories of places like the Glacier Park Lodge in this next photo, where we began our honeymoon bike adventure through the Canadian Rockies, 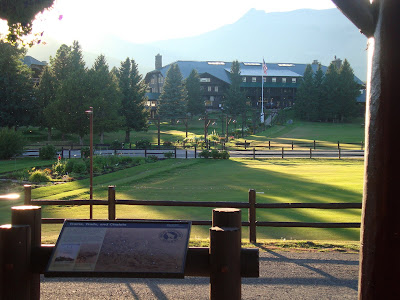 or of the Isaak Walton Inn that we stayed at on bike trips in 2005 and 2006 (when we took this photo of the passing Empire Builder). 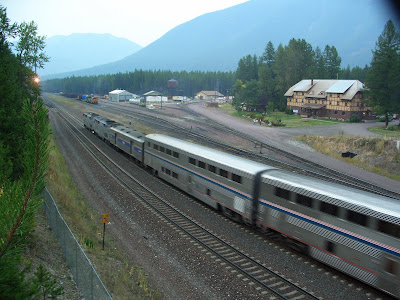 Yes, we truly do enjoy taking Amtrak as part of our bike trips.

Well thanks for joining us on yet another one of our adventures. We're now back in Seattle and have no plans for the next trip, other than to know that there'll be one. Check us out next summer!
Posted by Jeff & Louise Davis at 11:10 PM No comments: